I first spotted Mr E. Yote’s colorful graphic on the Harris Forum. Here’s a great opportunity to learn about RGB, color differentiation and how your printer works… and all while having FUN with OUR EYEBALLS.

So, pour a cup of coffee and spike it with a few drops of Dramamine as we bend our brains with color spirals.

First, WTF are we looking at? Within this swirl of colors, are a swirl of blue and a swirl of green. If all your optical-visual parts are working correctly, the blue and green spirals should be easy to spot. 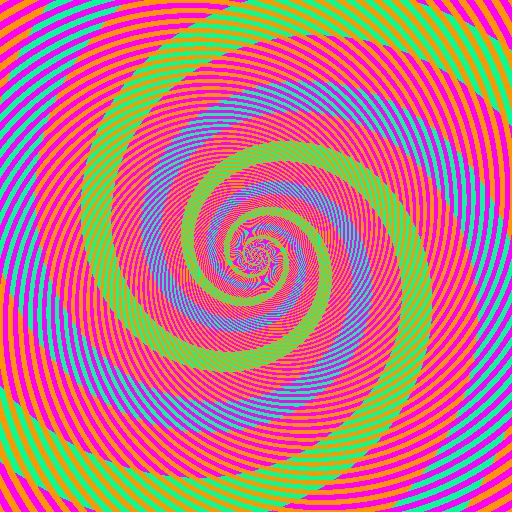 There are actually only three so-called colors in the graphic and they were thoughtfully chosen. They are green, magenta and orange. If you recall the RGB color wheel, those choices should be a total giveaway.

Here are the three color-spiral components in separated form:

Notice first that the orange pattern is the same as the magenta pattern but turned 90 degrees. Both present two spirals of white. Notice next that the green spiral pattern is different and consumes half as much of the square as the other two. They are positioned to line up on the white spiral-like areas of the orange and magenta patterns. So where’s the blue swirl? In this unusual example, blue is the Third Stooge.

Some may tell you that this another fine example of why we should not trust our perception but I can assure you that this is not a trust issue. If you want truly illusion free sight, wear a sleeping mask. All is as it should be, including the blue spiral.

Why is the blue spiral there? Is the trick in the spiral pattern? The color choices? The way they overlap?

Yes to all but the overarching reason is distance. I’m sure I have a long way to go to convince anyone of that.

Let’s see where the blue went…. Here are three versions each with one color subtracted. Already, something funny is going on. Notice on the left how the orange and magenta spirals’ white areas combine into the spiral pattern of the green area. The orange and magenta are plain to see against the white stripes but together they push each other into a sort of red. At that level of detail, this is normal thing for our EYEBALLS to do.

Also notice that average grey-scale level of the combined colors is darker than where either of them combine with white. As a result, in the center and right versions, the green spiral appears darker where it lays over the other colors. And notice that the orange and magenta spirals each darken two of the green spirals… and opposite ones.

Both push the green color a little bit. The right side looks like two different greens and the middle suggests a bit of blue.

Put back together, the blue swirl resumes its phantom existence.

Remember the little water glass rainbow on the white page? The whole rainbow disappears into a fog of white because the tiny spots of colors are too small to cause our EYEBALLS to differentiate them from the spots next to them. Where is the threshold? Look at the trailing edge of the little rainbow and how it fades away. It’s right there.

If you were to hold that paper close enough to see the colors on it, it would have be inside YOUR EYEBALL. Thankfully, there is no need to try that as Mr. Yote’s graphic amplifies the point. Like most colors we see on a routine basis, the further away we are from them the more we moderate or average out to a single hue and shade. As we get closer, subtler tones of color begin to differentiate from each other and from really close up, a whole riot of colors may appear. Start with the big Google map and keep zooming in to see your computer perform the same process. See how a dull greenish brown landscape is actually made up of thousands of colorful PT Cruisers.

The FUN doesn’t stop there. Next up, the original and two variations. Can you see which single parameter has changed?

In the middle version, the green pattern has been changed to blue. Now, green is the Third Stooge.

On the right, out pops the one color that seems to be missing or ignored until the green is changed to match the orange.

To make the blue go away, we can use the same zoom button or get really close to the screen or we can make it FUN. Or try to.

Here is a detail of the spirals. Still blue? 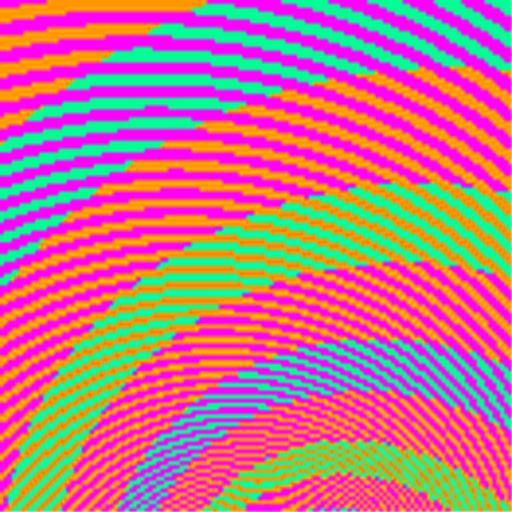 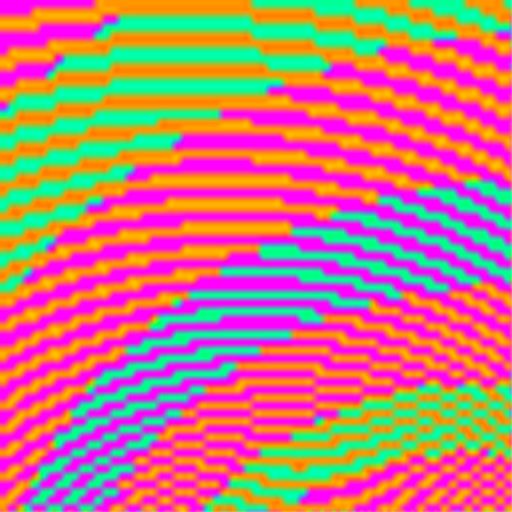 The threshold should be in one of these…

The combination of colors and their placement set just the right condition to make your EYEBALLS push the two green stripes away from each other (chromatically speaking). Lost in the blue-green hoopla, is the gorilla in the picture. Your EYEBALLS are pushing the orange into grey.

Orange is, as Curly would say, “bottom man” in this picture. Orange is out-ranked by both magenta and green in RGB land. You didn’t see orange in the color wheel or its phantom afterimage. Magenta was there in the after. Green is G itself. Orange is between the color red and the anti-color yellow in RGB land. The strong saturated shades of green and magenta will keep your EYEBALLS too stunned to bother with any sensation of orange. As in, not seeing it. However, its input still pushes it neighbor colors slighty to red with the magenta, and slightly yellowing the green and becoming almost visible next to it (no peering).

How does that make blue? The green spirals didn’t turn blue just by being over the magenta spirals as shown above. A little bit maybe. It takes two more pushes to get the blue going. Your EYEBALLS are pushing away the orange that is surrounding the green-to-blue swirl and in doing so is negatively tugging the magenta into blue as well as the green into blue. That’s three pushes.

Orange bobs at the surface of the color differentiation threshold in this example. Strong enough to push but not enough to be entirely seen.

If this wasn’t weird enough… This video screen operates in RGB land. It is using red, blue and green to produce the orange and magenta that is tricking YOUR EYEBALLS into seeing green as a blue that isn’t there.