When I started playing in bands, singles or 45's had given way to albums. Bands and listeners adopted them as a twenty minute palette of sound. Song order mattered. Songs could be short, broken up or endless or not a song at all. The most egregious were called Concept Albums. It was long ago but my brain is still wired to think in Sides or Books or parts. Here are five PRCA's served up in side form. Click on the cover to go to the song page. 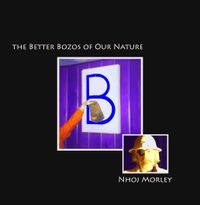 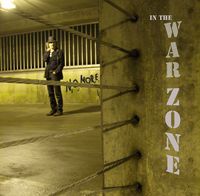 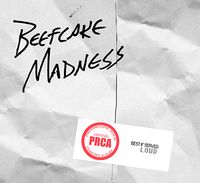 A Side of A

A Side of B

A Side of C 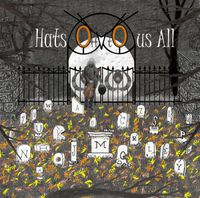 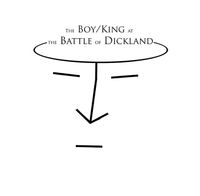 The Tale of the Tracks...

The pooka blind (a small one-nut fruit cellar) opened for mischief as a tape-free digital studio in 2012. I was open to a new personality, one with shorter hair, if I failed to make something of it. Tired of carrying around project ideas in my head for decades, I sought the freedom and inner peace only found by making them come out of the speakers.

Many months were spent learning that my ancient ingrained production techniques needed as much rewiring as the gear. Only a measured amount of old school thinking can be applied to a rig that patches into a computer with a glowing snake face. The rig was modern enough to recreate the sounds of 1973.

When I first got into a rock band, the typical cover set was all Stones, Stooges, MC5, Cream and Hendrix. That was FUN for a few years but some of us got restless for something more interesting. For me, there was nothing more interesting than the anything-goes, musically free-form concept album. Unfortunately, by the time I was of legal drink-age, progressive rock concept albums (PRCA's) had gone out of fashion. Time has passed and all that silly excessive bombast and pretension is mostly forgiven now. I wanted to start my new digital era with something I was sure I knew how to do… make something that sounds like it came from the past.

The first brain-boil to be relieved was the Edward Gorey-inspired chronicle of the first Gashlycrumb tiny to go.  Amy's flight down the stairs deserved a concept album about mortality that carried on like a sack of Halloween candy on a warm fall evening. That had been the plan since sometime in the seventies. Some of the songs are as old as my HS diploma. Hats Off tO us All translates as "we are all as good as dead". It was to be about mortality in general and suicide in particular. I was the gloomy gus that everyone thought would be the first to go. Thirty years later, they were wrong. Losing mates that way was like pieces of my landscape breaking away and vanishing under water.

A proper concept album may have songs but its fundamental unit is the Side. Vinyl records allowed around twenty minutes of continuous concept consumption and playing a whole side was the easiest way to handle them. For many listeners, sides took on as much or more of an identity than any of its songs. It seems more authentic and proper to present these projects in multi-side fashion for streaming.

The next project involved updating various tape-based items from the past before the reels went to the recycling center. Many are embarrassingly primitive or intended to be demos for bandmates. Old sentimental tracks were preserved and new drum and keyboard sounds were applied to surviving MIDI tracks. Courting the Apocalypse and A Strange Gesture of Contempt play like a rebuilt transmission with dodgy shifting and wincible grinding sounds. I should park them out of site. 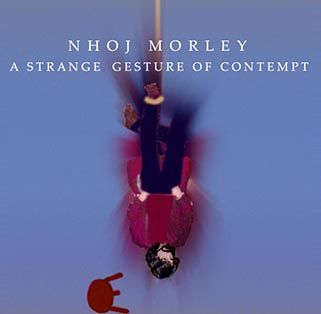 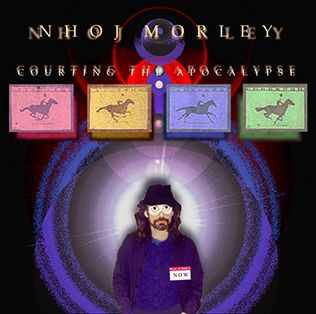 Not included are the two collections (Blue Invasions, Purple Pastimes and Science for Criminals) of items recorded with the lads in the seventies and eighties. Notice the band logo that works upside-down.

Also in the eighties, us lads and others took on a large radio-play that we wrote and recorded as the Iran-Contra drama unfolded. Zug Island was about people absorbed in computers and an Administration desperate to make citizens believe in a fantasy world before reality itself begins to peel away universe by universe. The four half-hour episodes still await some modern digital tidying.

Shaking the Ether was a collection of one-off's and items by various bandmates dating back to 1972. I may share all that some day. Until then the title serves as an extra folder for single items and weirdness.

The cover art is close-ups of my daughter's paintings and reveal our penchant for facial recognition.

In 2015, I spent more time on keyboard than the rest of my life put together. The next neuron-clogging project involved Russian collusion. I wanted to tackle Scheherazade and a handful of other pieces as prog rock. The list quickly winnowed down to two items as the full scope of their undertaking became apparent. The rest of material was to be informed by Russian composers and gets a bit Zappa-like.

Beefcake Madness was first described to the lads in a pizza parlor booth as a satire of manliness in four side-sized movements each containing one normal song. The rest would be free-form prog instrumentals that were often interrupted by comedy skits. The record was to be pinkish and appear to be wrapped in butcher's paper with a bit of pink liquid trapped in the shrink wrap. The real cover is here… rules about metadata won't allow the PRCA sticker on the so-called 'digital cover'. All the potty-mouth lyrics are not a problem because the cover is allowed to say 'parental advisory for explicit lyrics'.

Instead of being a symphony, it would include a symphony tiny enough to fit in with some songs and the Russian cover tunes. The pile of symphony-like material turned out to be not tiny at all and was stuffed in the freezer unfinished. The skits feature folks from the Harris Forum, which was the only link to here for a long time. I have a license for the sound effects. Somewhere in the course of making this, I began to grasp and even embrace the digital-studio method. More time and effort could be put into playing the parts many of which left me a puddle of frustration after a hundred tries. That is as it should be. The pooka blind was built to be a work-out space where self-inflicted torture eventually leads to that one golden take that forgives a thousand goofs.

By 2016, I had acquired enough used digital drum stuff to make a scrap yard electric kit. Drum parts were more often triggered by whacking a pad than tapping the keyboard. The sound of a kit was spread into separate layers with the same few pads being played. In time, I had enough triggers going at once to make full kit drumming possible.

My first role in a band was da drums. Forty years later, I thought it might be FUN to relive the experience of being a rhythm-coordinated half-octopus. It's harder than I remember it being.

A significant amount of BM's drum parts were laid out as full or near full kit recordings, even if they were nit-picked with later. I wanted to play as much of the next project as my bones could handle and then stuff the kit in a plastic bin and shove it somewhere in the garage. That project got more drum time because the other parts happened quickly. This PRCA was stuff the band played in the eighties. The arrangements had years of tweaking and many were recorded once or twice already.

In the War Zone was a grand and pretentious project born in the scary days of the early Reagan Era, which history might now remember as trump-lite and a mere premonition of what was to come. A famous and elderly entertainer with strangely colored hair has moved into the White House. Everyone's attention is drawn toward Russia's aggressive moves on its neighbors. Folks speak about the 'inevitability' of nukes landing somewhere. A new Caliphate vies for attention on the world stage. The public is trying to understand Islam as something other than a native voodoo practice. Videos of ninja-suited swordsmen are scaring everybody. A grassroots movement rises against the financial elite who are taking too big a helping for themselves. An explosion of new information sources begins to drown the public with agenda-driven formats of truth. That's right! It's 1983!

Politics is a combination of chapters and incidents. Sometimes we have a plan and we compose the next chapter of the story we think we're living in. Just as often, a single incident can occur that changes the direction of the story or changes the book altogether. Democracy is no longer a crucible of what we want. It’s a cauldron to boil your enemies in when you win. So few of us really wanted it anyway. For most, it was only a temporary compromise until their Super-Magic-Messiah-Person finally shows up. Every knee shall bow. That way, no one can see to fill in the voter ballot.

The unfinished parts of the pseudo-symphony were sorted out in 2018.

The Boy/King at the Battle of Dickland emerged from the Beefcake Madness sessions as an over-sized tale of a thoughtless buffoon who changes the world. I never expected to see one on TV. This PRCA is entirely instrumental and was mostly played on a keyboard with the power trio (guitar, bass and drums) in a supporting role. Except for the Bonus track, which features short moments of super-compressed power trio bombast, which was once part of Beefcake's Epilogue track.

Some technical details… all was recorded with a Lexicon Omega or Alpha using the ProTracks app that comes with them. Drums sounds came from an Alesis DM-5. The ersatz Hammond and Leslie come from a Korg M3R. A Korg NX5R provides the orchestra sounds and effects. All were triggered by an M-Audio Keystation 61 or a pile of old drum pads. A Gibson Grabber, a Michael Kelly Dragonfly, an Ibanez SE, a Dean six-string and twelve-string were played though a Digitech GNX-3. Other sounds were mic'ed with a Sony ECM-56. 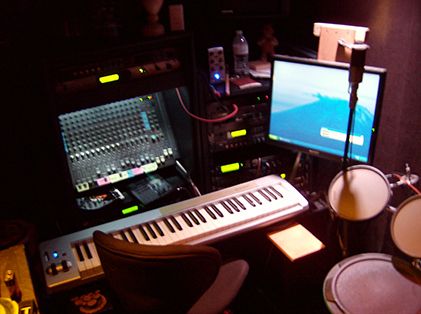 Making worthy transfers of the mixdowns was a long, dark tunnel. Specifically, my drain stack/antenna next to the pooka blind called for drastic measures. Here in Radio Alley, RF levels cause Hot Earth Syndrome where signals drive ten feet or more into the ground and can make chain-link fences talk. Everything was unhooked except for two computers, a strong pre-amp and a spectrum analyzer. When these were placed in a perfect axial alignment with the drain stack, the analyzer registered a glorious noise-floor of -85 db. That's nearly 20 db lower than previously achieved.

I'm not looking for a future or a fanbase as a PRCA artist. There is no band or tour t-shirts. I did all this mainly to beat the daylights and some songs out of myself in hopes of justifying my personality. That remains debatable.

One day perhaps, like seventies prog rock, I too can be forgiven.